These smiling faces have been greeting me and Ben in the mornings... 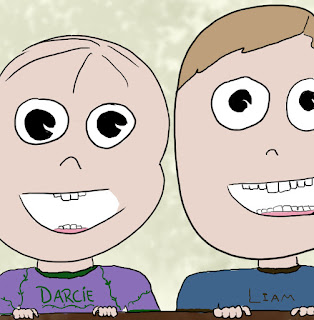 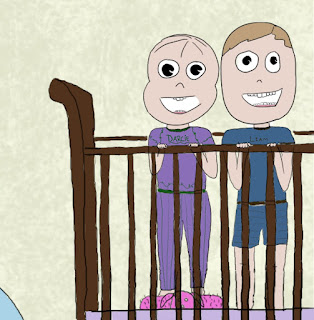 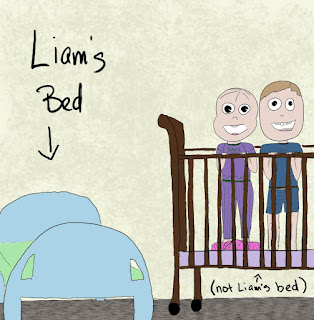 Without question, one of the greatest theme parks in existence is Six Flags over Georgia. I feel this park gets overlooked because it belongs to the Six Flags franchise, and so does not have much to distinguish it from all the other Six Flags', unlike Cedar Point or Disney World which bring their own distinctive images to mind.

I still remember my first visit to SFoG, it was my first theme park ever (and I have since grown to love parks), and my mom took my brother Keith and I for a home school themed day at the park. I was wary of riding roller coasters at that point, so I had to work up to it. First we rode on a small attraction that spun around while you sat in a carriage -- like a horizontal ferris wheel. After we were done with that, I felt I had worked up my nerve enough to try a "real" roller coaster. Luckily, there was a coaster Keith wanted to try that was immediately nearby. It was called The Ninja. It changed my life.

Though I can't say I enjoyed that first ride per-se (I found the flips to be too much to handle) it did open my eyes to the possibilities of enjoyment. Since I didn't like the flips, I only stuck to rides with drops, like The Great American Scream Machine, The Mind Bender (later to become The Riddler), and what soon became my favorite: The Georgia Cyclone. I rode that one twice.

The day at the park was phenomenal. We got to stay until 10pm. The evening air was quite chilly and none of us thought to bring jackets, so my mom bought us all matching white hoodies with Six Flags emblems -- an extremely rare splurge at the time. We also split a funnel cake. It was disgusting and I loved it.

I went back to SFoG a few times over the years, mostly traveling with my youth group to Atlanta Fest (which was so epic, every single year), but when the park really came back into my life, like a long missed friend, was on the eve of my 21st birthday.

My husband Ben and I had moved to Atlanta for a job back in '06, where he worked for a few months, and then was promptly laid off because the company couldn't support all the employees they'd hired. Though we were dirt poor, Ben scrimped and saved and got us both season passes to Six Flags, and we went on the opening weekend of the seaon, which happened to be the weekend of my birthday. While we were there we tried out the new ride (The Goliath -- my new all time favorite), and then set about riding all our old favorites. I got in a ride at the Cyclone and the Scream Machine. As we were walking past The Ninja I told Ben about how it had been my first roller coaster. Turns out it was his first roller coaster too! So we got in the non-existent line and decided to ride it for old-times' sake.

The Ninja has never been a smooth ride. Even when I first rode it, back in '93, it was known to knock your head around into it's not-so-soft, over-the-shoulder plastic harness. It was even worse than I imagined. I guess that was to be expected, considering how old it was, but it was pretty bad to begin with. Less than halfway through the ride I realized I'd made a big mistake. Not because of the loops (I like those now) but because I knew I was in for a headache afterwards. I don't really recall the ending sequence of the ride, but I do know that the car jerks about in some way that caused me to lose my vision for a few seconds. It was like a gift straight from Heaven.

I know that is a confusing conclusion to come to but I'll tell you why I was grateful for the Coaster Ride from Hell. For those who don't know me, I want to give you a brief recap of an important event that happened my senior year of high school. I got a dark spot in my vision one day and slowly, over the course of a couple weeks, I noticed it got bigger. My mom had us all scheduled for routine eye exams so she told me just to mention it to the optometrist when I was there.

Unbeknownst to any of us, the ever growing dead spot in my vision would cause a whirlwind of increasingly dire predictions from increasingly educated doctors. The final theory, and the scariest, was that I had a tumor on the back of my eye that had caused some bleeding. I was told not to lay horizontally for an indefinite period of time -- not even to sleep -- so that the blood would drain more quickly so they could see underneath it. And I obeyed that command for months. It was agonizing and I never felt fully rested, and had stopped feeling fully human even.

Finally, one day, I was sitting in church and I had just completely given up. I prayed (not for the first time, but probably with more abandon than ever before) for God to clear the blood out of my eye so we could finally figure out what was wrong. Instantly, my vision cleared. I know that sounds so churchy-cliche, but if ever there was a miracle in my life that I feel the need to share, that is it.

Well, we packed our bags and headed to see the oncologists in Philadelphia (where they resided and worked). They found, much to the relief and utter joy of everyone, that I did not have a tumor, just a clot of scar tissue resting right on top of my eye. They had no idea how it got there, or why my eye had bled so much, when I had not been in any car accidents or been beaten by a jealous ex-lover or anything. Though I was glad it wasn't cancer I was always left with a bitter taste in my mouth. It seemed the mystery would never be solved. What had happened to my eye?

Cut to my LAST ride on The Ninja, when my vision has just cut out. Suddenly I'm recalling details of that summer when the eye problems started that I would never have pieced together otherwise. I had come to SFoG for Atlanta Fest. My friends and I had rode The Ninja. Due to my "monthly visitor," I was taking large doses of ibuprofen (which at the time, and for many months afterwards, I did not know was a blood thinner). The mystery was finally solved. It was the violence of the roller coaster that had caused the trauma. This was a theory the doctors once had, but had dismissed it because they didn't know why I had bled so much, because I had told them I hadn't taken any aspirin products -- again, not knowing ibuprofen counted.

So there you have it. Now, don't let this stop you from riding roller coasters. They are wonderful and I always look forward to riding them, especially at Six Flags over Georgia. Just don't ever ride The Ninja. I certainly never will again. But there's no stopping me from riding The Goliath. :D
Posted by Nia Greene at 8:27 PM 2 comments: